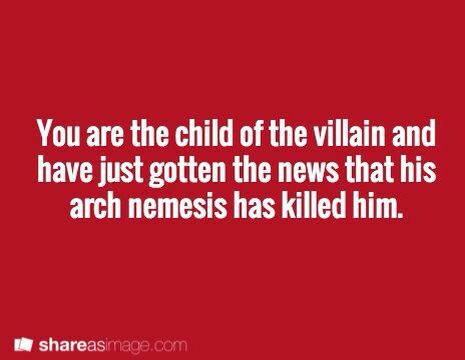 The young woman clicked of the news broadcast, unable to listen to another word. She finished buttoning up her black dress and adjusted her veil. She could not take the lies and double talk any longer. She had a eulogy to deliver. Her mother was waiting in the kitchen. Together, they began the long drive to the funeral home.

“I never had the typical childhood. There was no Saturday morning cartoons or tee ball games. My family did not play catch in the yard or go to the beach for vacation. I always knew I was loved, but my life was far from normal.

My earliest memory is from my third birthday. Instead of going to the zoo or having friends over, my dad brought the zoo to our house. I spent hours roaming around the yard, enjoying my personal zoo. When the police and animal control showed up to take the animals, I was devastated. My mother held me as I watched them take my dad away.

That was the day I found out the truth. My dad was the Phantom Knight. He spent his time prowling the streets for easy targets or robbing shops. He always brought me and my mom home the most amazing souvenirs. Despite being labeled a criminal, he was an amazing father.

Today, the papers are celebrating the death of the Phantom Knight. While those who knew him best are here, mourning the loss of a beloved father and friend. When we resourced the news that he had passed, we were stunned. The world has lost a truly amazing man.”

The young woman left the podium, pausing on her way down to kiss her father one last time on the forehead. She sat next to her weeping mother, her face a calm mask. The mask hid her true emotions. Emotions that were brewing and growing like a tidal wave. Her anger threatened to explode out of her. She was going to make them pay. The papers who were dragging his name through the mud and the so called hero who had killed him. They were going to regret this day.

Thanks for reading! I hope you enjoyed this little flash fiction segment.

Nothing can describe the feeling of falling asleep in the Earth’s shadow and waking up to find the red surface of Mars glaring at you. It looks like an angry ball, just daring us to trespass on its surface. The sight of the planet leaves you with an overwhelming sense of dread and apprehension. I’m trying to stay strong for the rest of the crew, but I can’t help feeling like we might never see Earth again.

We woke from hypersleep a day before we reach the planet’s surface, just as planned. All systems seem to be working as expected. Thanks to the improvements, we did not experience much muscle loss. We are just dealing with minor soreness due to inactivity. We should reach the surface without any complications.

The broadcast has grown stronger, but we are no closer to translating it or identifying the source. The constant beeps and clicks are not helping with moral. Smith has taken to wandering what little space we have. I fear he will break before too much longer. I have to express my concerns once again. It was foolish for us to come out here without knowing what the broadcast meant. We do not know if it is a warning or a plea for help. We could be flying into some kind of trap.

After years of studying life in harsh climates, I am not sure life can survive here. There is no water visible on the surface. The surface appears to be made entirely of rock. When we land, we will use the tools we brought with us to attempt drilling. We will proceed with our experiments despite my reluctance to step foot on the surface.

Captain Keith sat back, rubbing his temples. He knew the entry sound like death was a sure thing, but he was told to be honest. He could not shake the feeling that they were in trouble. If Smith lost it, he would be alone. Something needed to change. He winced as the beeping and clicking started up again. That was not the change he had in mind.

Sela is not your typical business theme. Vibrant, bold, and clean, with lots of space for large images, it’s a perfect canvas to tell your company’s story.
Sela is responsive, which means it adapts to any screen, providing your visitors with a great browsing experience on any device.