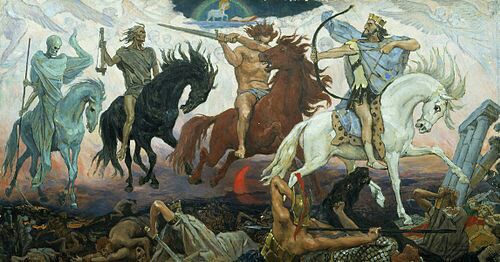 Famine followed the small girl back to her tiny apartment. The halls leading to her room were lined with sick and dying people. Along the way, she stopped to help some of the worst cases of disease. Taking their sickness into her body and ending their pain. He watched in terrified fascination as she worked. Other then soft groans, she did not make a sound.

After she had helped as many of the sick as she could, she stumbled weakly into her room. Famine looked around her sparse room, curious about her past but unsure how to bring it up. Eventually, she stood up and gathered a few possessions in a tattered backpack. She threw what little food she had in the bag too, before looking at Famine for guidance.

“The Indians said that I would be guided to each of the four. That is how I found you. I think there is someone to the east of here. It should not be too far, the tugging feels stronger then it did with you,” he answered the unspoken question.

When he was sure that she was ready and able to travel, he headed back out of her room. The bodies of the dead had been removed, only to be replaced by more disease and plague victims. Tears ran down the girl’s silent cheeks as she walked past them. She wanted to help them, but she knew that she would need her strength for the upcoming journey. She stared ahead, desperate to avoid the pleading eyes.

Famine could sense her distress and started to walk faster. He wanted to get out of the hallway anyways. He could practically feel the plague climbing across his flesh. Before the end had come, he had been a nurse. He knew from experience just how quickly germs could spread. That life seemed like an a faint dream now. He could barely recall his life as Ben.

They set up camp for the night in a small grove of trees. Famine would have liked to walk further, but the child was slowing him down. Her breathing had become labored and she started stumbling. He knew she needed to rest. He was not sure how taking away people’s illnesses affected her, but he could tell it wore her down.

Pestilence collapsed into a heap as soon as they stopped walking. She could not feel the tugging that Famine claimed to feel, but she trusted him. She had always been really good at reading people’s true intentions. She tried to stand up and help gather firewood, her muscles protesting every movement.

“You rest, I can handle this,” Famine noticed her trying to rise. “You should eat something while I make a fire. I am not sure how much further we have to walk tomorrow, hopefully not too far.”

He stared off into the darkness, his eyes following the tugging sensation. After the end, huge cities had been abandoned or demolished. Cities that had been around for years disappeared over night. He had no idea where they were heading. If he had a normal map, he would guess they were heading towards Maryland. For all he knew though, Maryland could have sunk into the ocean.

Famine glanced over at the girl, surprised to see her asleep already. Traveling in silence all day had made the day seem longer, he hoped the next horseman would be more talkative. He was tired of working through his thoughts on his own. One thing he had decided today was that he needed to talk to the Indians. He needed to get answers to his questions and help figuring out his mission.

He built up the fire and laid down next to the wood pile. Building a fire was a necessary risk. The night chill was too much to handle, but the flickering light could attract bandits. He slept with his dagger clutched in his hand. The only way that they would be in danger is if they were taken by surprise.

The girl woke as soon as the sun peeked over the horizon. Famine was still asleep next to the smoldering ashes of their fire. She walked over and gently touched his shoulder. She stared at him indifferently as he jumped up, dagger in hand. This was the longest she had gone without helping anyone along and she felt stronger then ever.

Famine looked down at the girl, shaking his head in disbelief. She had not even flinched when he jumped up. He knew that he had no room to judge, but the girl was strange. He kicked dirt over the embers and they started walking again. The tugging was much stronger than before, making it easy to follow. Before they had walked too long, a city came into view. This was the city where they would find the next horseman.

Famine was shocked upon entering the city. It seemed almost normal. People walked the streets and talked to each other cheerfully in passing. Stores were open and selling everything from food to luxury items like soap. No one seemed tempted to loot anything. It was the most normal city he had seen since the end. He could not wrap his head around it.

“Excuse me,” he stopped a passing woman. “What is going on here?”

“We are under the protection of the Tookie Brothers. Under their rule, there is no need to revert to such savage ways as other cities,” she answered politely.

“Where can I find these Tookie Brothers?”

“They live in the blue house on main street.”

Once again, she nodded in silent agreement. He did not think she would ever talk. They walked towards main street. Everyone they encountered greeted them with polite smiles and even some handshakes. It was very unnerving. Famine was grateful when the blue house came into view. He expected the house to be guarded or at least fortified, but it appeared to be a normal house. It had a large porch that circled the entire house. The yard was in pristine condition. They walked up the stone walkway and knocked on the solid wood door.

A large dark skinned man answered the door. His meaty arms were covered in tribal tattoos and his dark hair hung to his shoulders. He greeted them with a warm smile.

“To what do we owe the pleasure,” the man asked in a thick Tongan accent.

“We are looking for the Tookie Brothers,” Famine answered hesitantly.

“Well, I am Anga. My brother is called Malohi. Please come in,” Anga swung the door open wider, motioning for them to enter.

Famine followed behind the huge Tongan, careful to keep the girl close behind him just in case things got crazy. They walked into a fancy living room. A second man identical to Anga was lounging on a couch.

“Brother, these two wish to talk to us,” Agna turned and frowned at them. “I do not think I got your names.”

“I am known now as Famine. You can call the girl Pestilence, but do not expect her to answer, she does not talk. We came to your city seeking the two remaining horsemen, war and death. I am not sure who-”

He stopped talking as Malohi stood. This brother gave off a distinctly more hostile vibe then his counterpart. He was not someone to be messed with.

“I am war and my brother is death,” he growled simply.

“Um, how do you know? Have you done things,” Famine asked awkwardly.

“Who are you to question who we are? We do not even know who you are,” Malohi advanced angrily.

“What my brother means to say is,” Agna stepped in between them, “We have known who we are for a few years now. War and death go hand in hand, you cannot have one without the other, so it makes sense that it would be twins.”

“But how did you find out you were different,” Famine questioned.

“We grew up in this house. When the end came, everything went crazy. People who we knew were running and looting everything. I had no idea people could act that way. One night a few years ago, I woke up to find Malohi gone. He has always been more driven by his emotions,” Agna smiled at his brother. “I left the house to find him. When I did find him, he was in an alley fighting numerous looters. I watched in amazement as he took them all on single handed. One thug somehow got behind him. I ran to protect him, but before I could reach him, the thug fell to the ground dead. I knew I was the cause.”

“If you had not reacted, it would have been me,” Malohi sounded like they had had this discussion a hundred times. “It was that night that I found out just how strong I am and just how quick my reflexes are. As the years progressed, I have become able to sense people who do not have good intentions. It has helped us run this city. I can pick out who will cause trouble and if they refuse to leave, my brother can end them with a glance.”

“As I said war and death go hand in hand,” Agna finished sadly.

Famine stared at the twins, still unsure if they were telling the truth. He had been sure about the girl the second he saw her, but he never expected twins who readily accepted their fate.

“They are telling the truth,” the girl spoke for the first time.

All three of the men turned to look at her, but she did not elaborate. She just resumed her stony silence.

“OK,” Famine finally said. “I think before we do anything we need to get some answers from the Indians. It’s a two day walk back to the park where they live. We need them to give us some guidance on how to restore balance.”

The remaining horsemen nodded in agreement. He was a little overwhelmed with their total acceptance of him as the leader. He expected Malohi at least to put up a fight about it, but he did not even open his mouth to protest. They settled in for the night, resting up for the long journey ahead.

Sela is not your typical business theme. Vibrant, bold, and clean, with lots of space for large images, it’s a perfect canvas to tell your company’s story.
Sela is responsive, which means it adapts to any screen, providing your visitors with a great browsing experience on any device.